As mentioned in our April 20th Maple Memo, we will be releasing Global MapleStory (GMS) roadmaps every quarter that cover the high-level contents and changes coming within the next 3-4 months. Since it’s only high-level contents and changes, please be mindful that it will list the notable updates but not everything that will be included in each patch. We recommend waiting for the respective update’s Update Preview post or Patch Notes post for details. Now without further ado, here is the GMS roadmap for July - early October 2022! 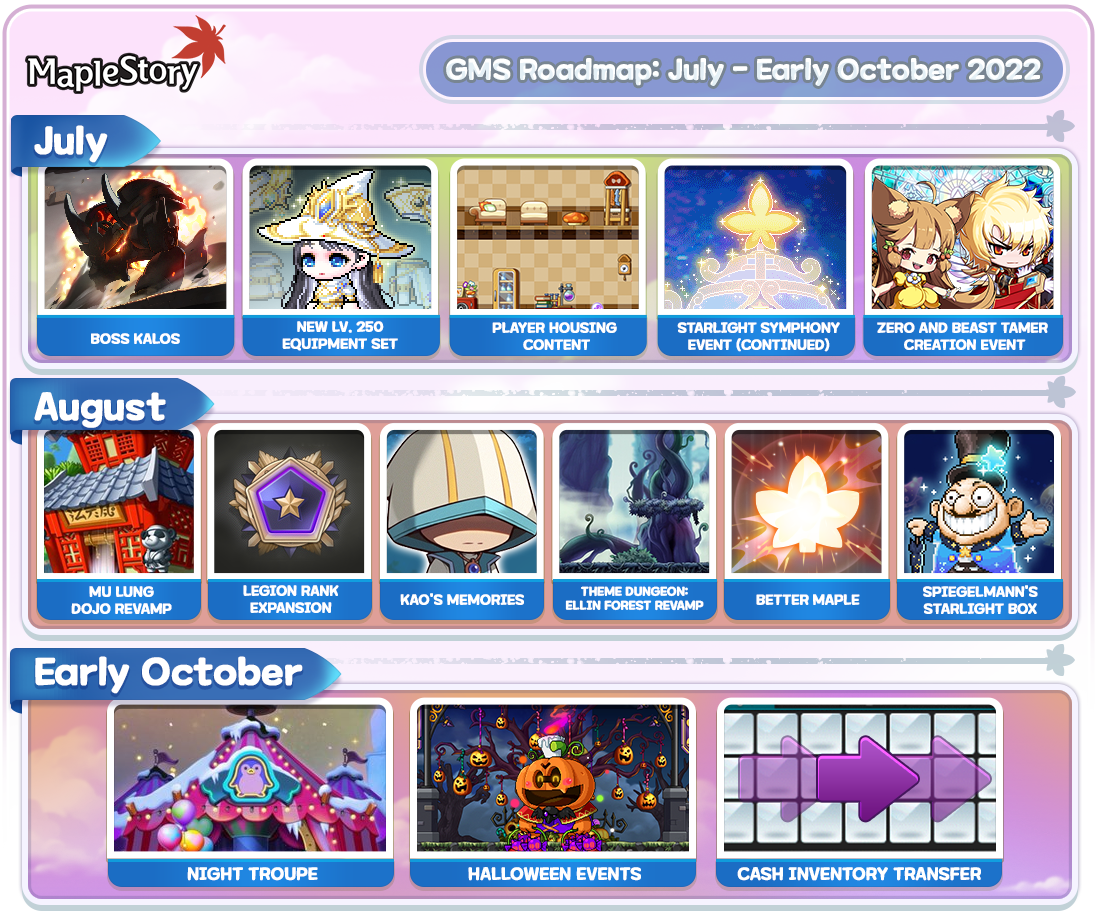 July - Destiny: Homecoming Update
Briefly introduced on our Destiny microsite and our April 20th Maple Memo, the second part of our summer update, Destiny: Homecoming, is coming soon on July 20th. It will introduce not only the boss Kalos in Karote, The Unending Tower but also the Lv. 250 Eternal Equipment Set. Our long awaited Home, a player housing system where players can decorate to their heart’s content, will also be included to put Maplers’ FashionStory to the next level. Starlight Symphony will continue with a few new events and Zero and Beast Tamer Character Creation Event will make a return.

August - Spiegelmann’s Starlight Box & Maple Pop Star Dreams!
Spiegelmann is preparing a Starlight Box filled with special gifts! Once players complete the daily mission by defeating monsters near their level, players will earn valuable rewards such as Symbol Selector Coupons, Growth Potion Selector Coupons, and various cosmetic items. Ever dreamt of being a pop star? Players can defeat monsters near their level and collect quest items to trade in and decorate their very own stage! Players will get to unlock customizations for the chair and receive functional and cosmetic rewards when they reach level milestones.

Early October - Night Troupe
Night Troupe is returning, but in Rien this time! Players can enjoy various attractions and receive generous perks that include stat bonuses, EXP buffs, and more. There are plenty of events and rewards to keep everyone entertained so make sure to keep an eye out for the details once the update is near.

That’s the high-level contents and events we wanted to share about the upcoming GMS updates between July - early October 2022. We hope this roadmap sheds light on and provides information that players may be curious about and assists with advanced preparation. As mentioned, there are more contents coming than those listed so please refer to the Update Preview post and Patch Notes post for the finalized details. Though, if plans change due to unforeseen circumstances, we will post a mid-update to inform players of the changes to the proposed timeline. The next GMS Roadmap for Q4 2022 will be released tentatively near the end of September.

Thank you,
Mjollnir and the MapleStory Team

Join Triciaisabirdy on Twitch This We...

Join the MapleStory community on Twitch this week and claim special Twitch Drop prizes as you watch!

The maintenance has been completed and we have extended Cash Shop items for 9 hours. Please resta...