HOME › THE GAME › EXPLORE THE WORLD OF MAPLE STORY

EXPLORE THE WORLD OF MAPLE STORY

From floating cities to giant submarines, alien worlds to hidden kingdoms, MapleStory features one of the most diverse landscapes in MMORPG gaming. Each area on the map has a distinct visual look and a unique culture to engross yourself in. In a world as massive as this, the journey never ends! 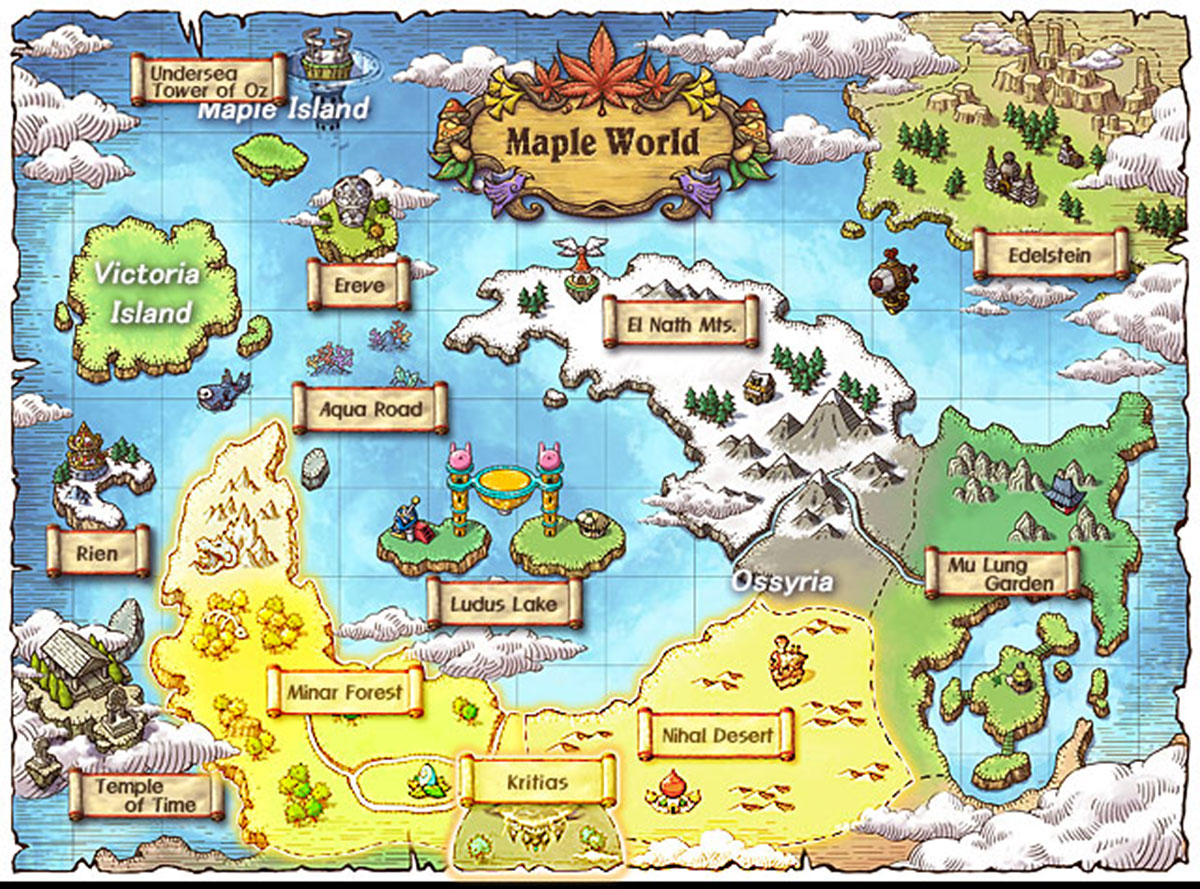 Maple World is the main realm of MapleStory and features dozens of unique and thrilling environments, each populated by distinct cultures with their own customs and histories. 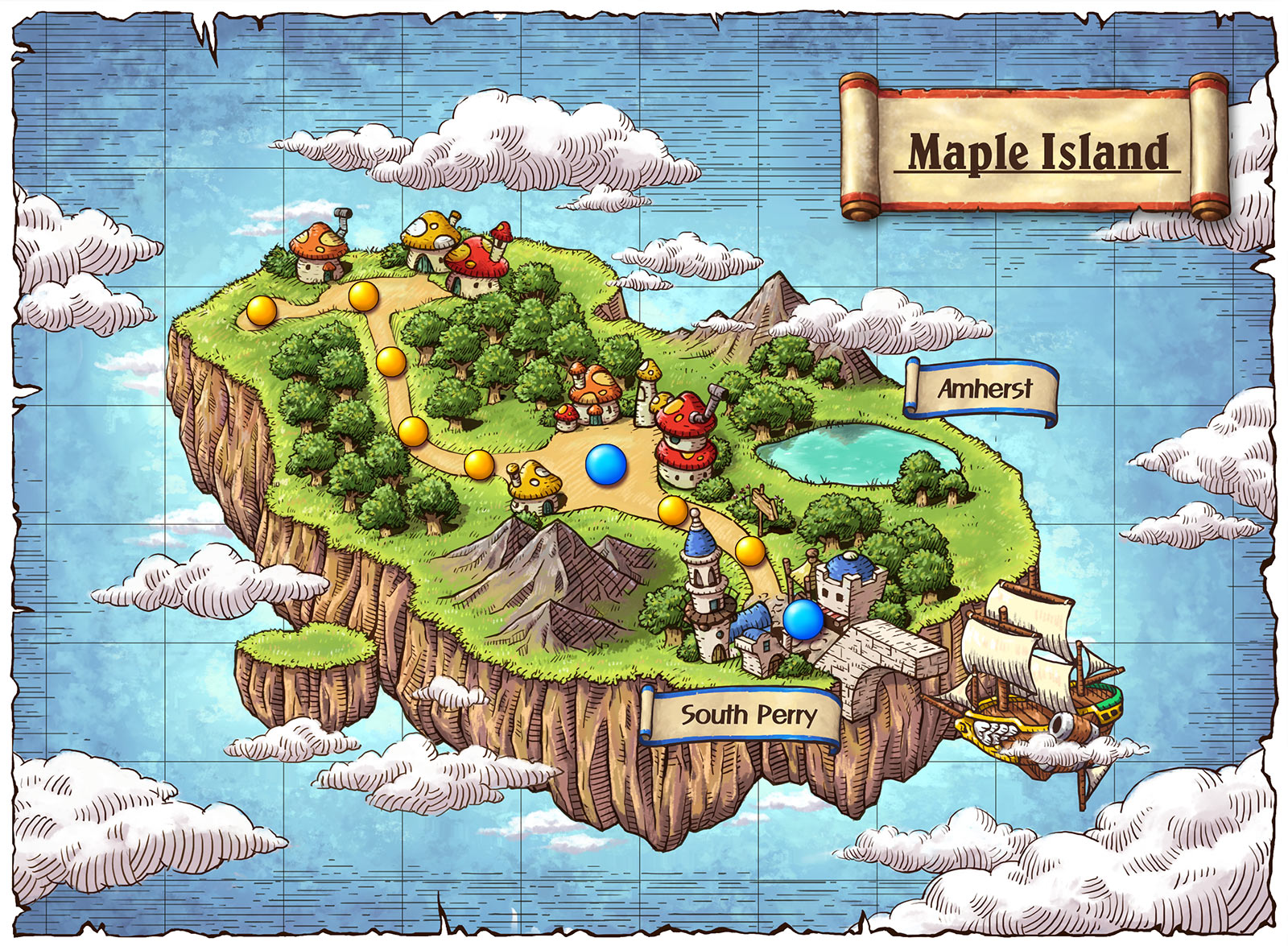 Maple Island, a small landmass with two towns, is where most Explorers begin their journey. In the center lies Amherst, the Island's biggest town and home to its best weapon shop. To the south lies Southperry, a port where Explorers can charter ships to Lith Harbor. 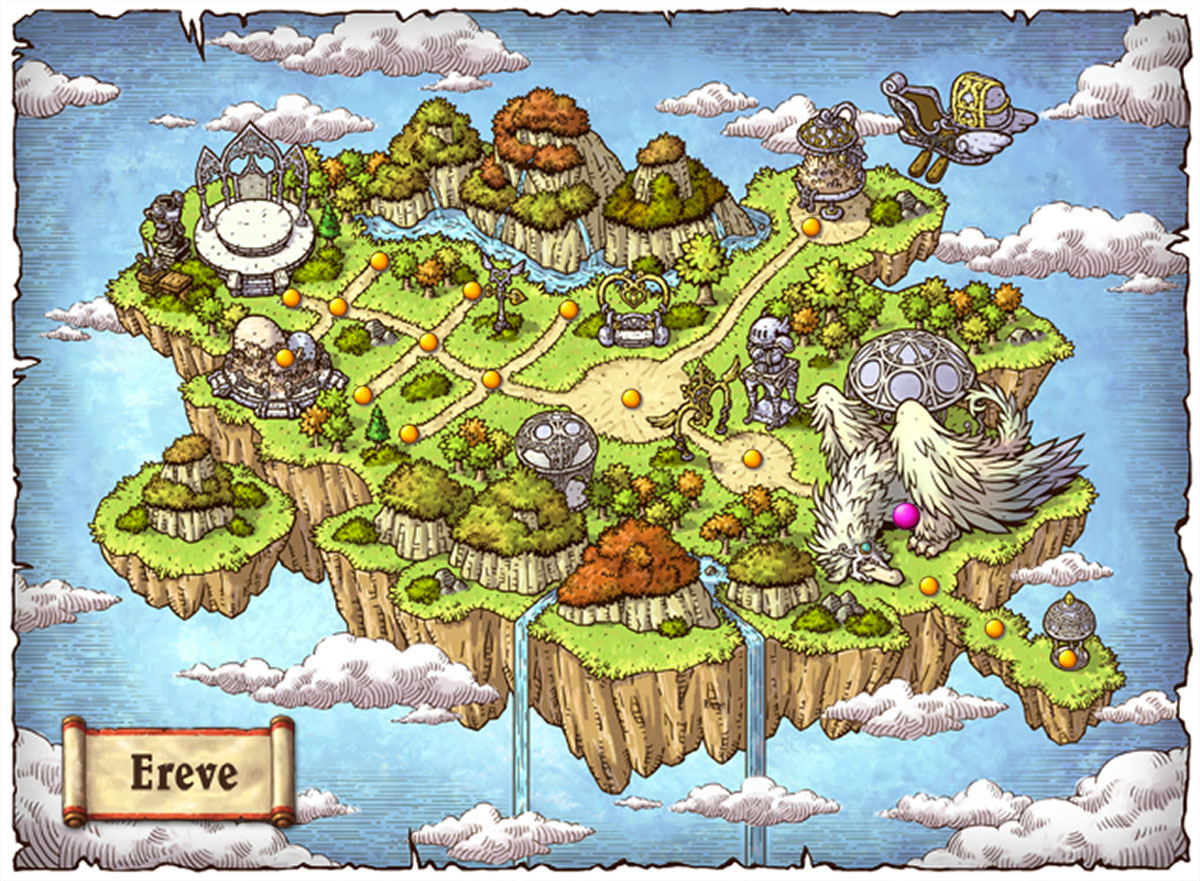 Ereve is a city unlike any other. Floating high among the clouds, it is the capital of an old empire and home to the empress herself, as well as the base of operations for her protectors, the Cygnus Knights. It is kept afloat using the power of a holy beast known as Shinsoo, and is home to many birdlike monsters and other critters. Accessible only via airship, it is a majestic wonder of Maple World. 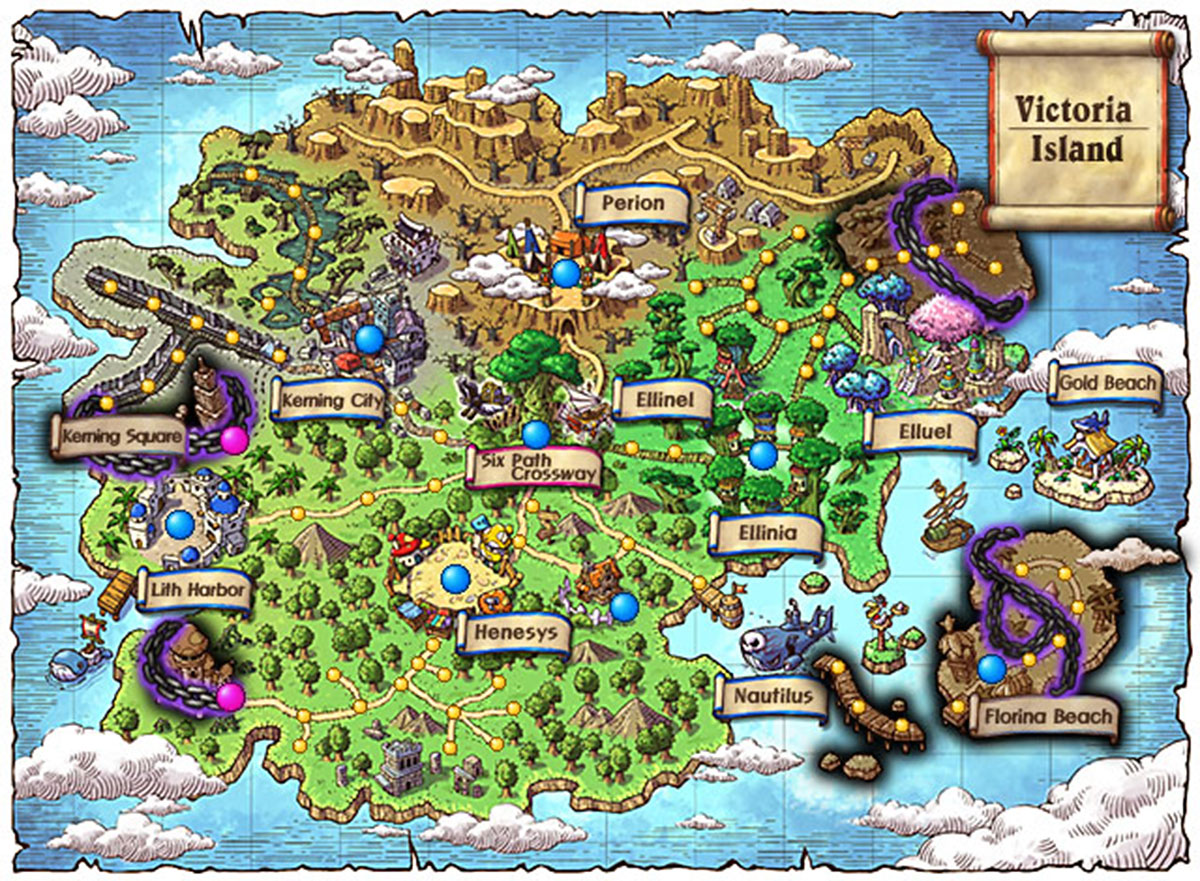 Victoria Island, one of the major landmasses in Maple World, is home to the bustling trade hub of Henesys. Other notable landmarks on the island include the Six Path Crossway, a crossroads that connects many major towns, including Perion, home base to the Warriors, Ellinia, hometown of the Magicians, Kerning City, hideout of the Thieves, and Lith Harbor, a major port and fishing village. Another port, Nautilus Harbor, is home to the Pirates and their floating city/submarine, fashioned after a giant whale. 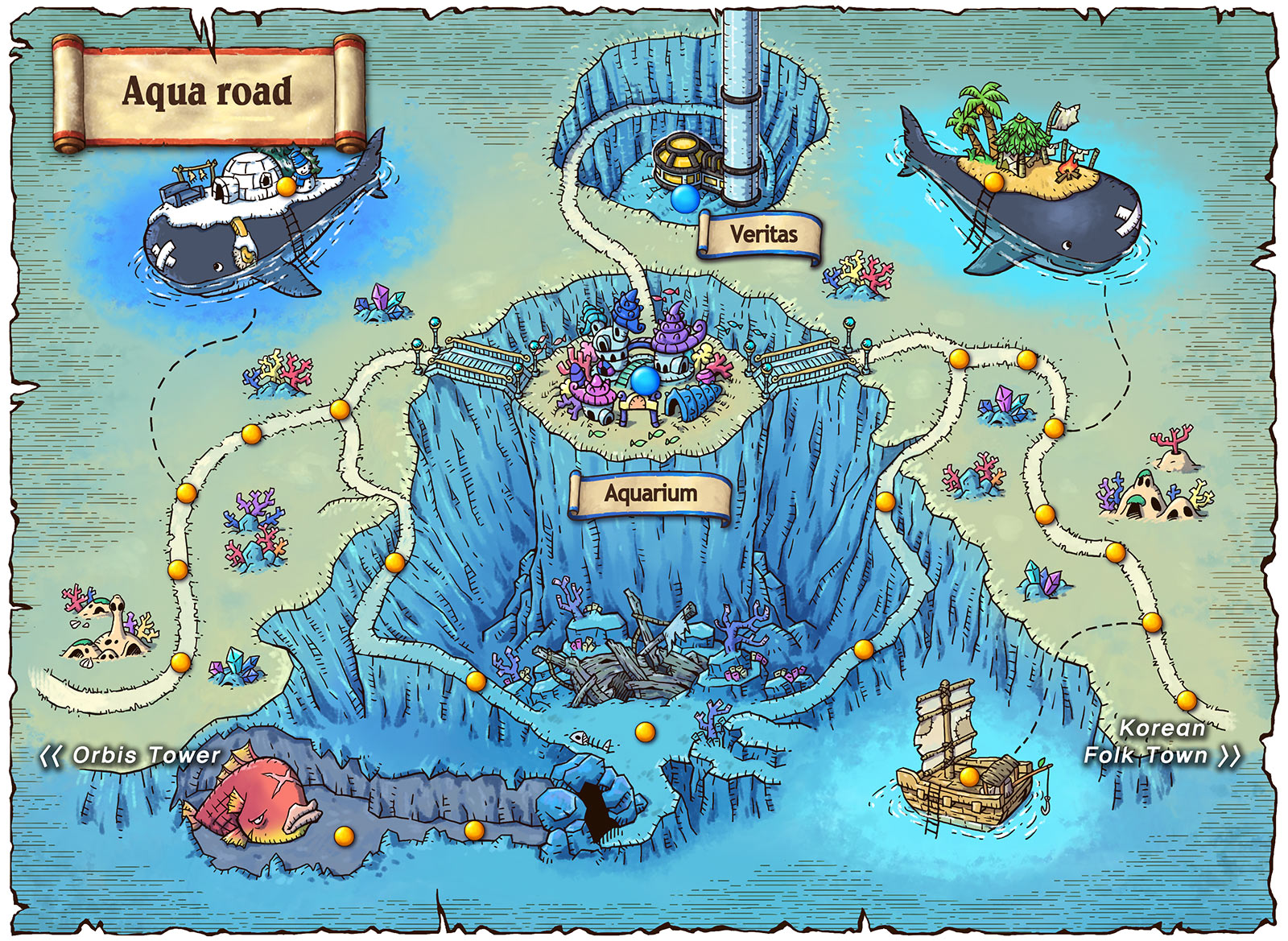 Aqua Road is an underwater region, accessible via an entrance at the base of Orbis Tower. Aquarium, known for its popular zoo, is Aqua Road's main city and lies at the bottom of the seabed. Many sea creatures and monsters can be found here, including ruthless Sharks. 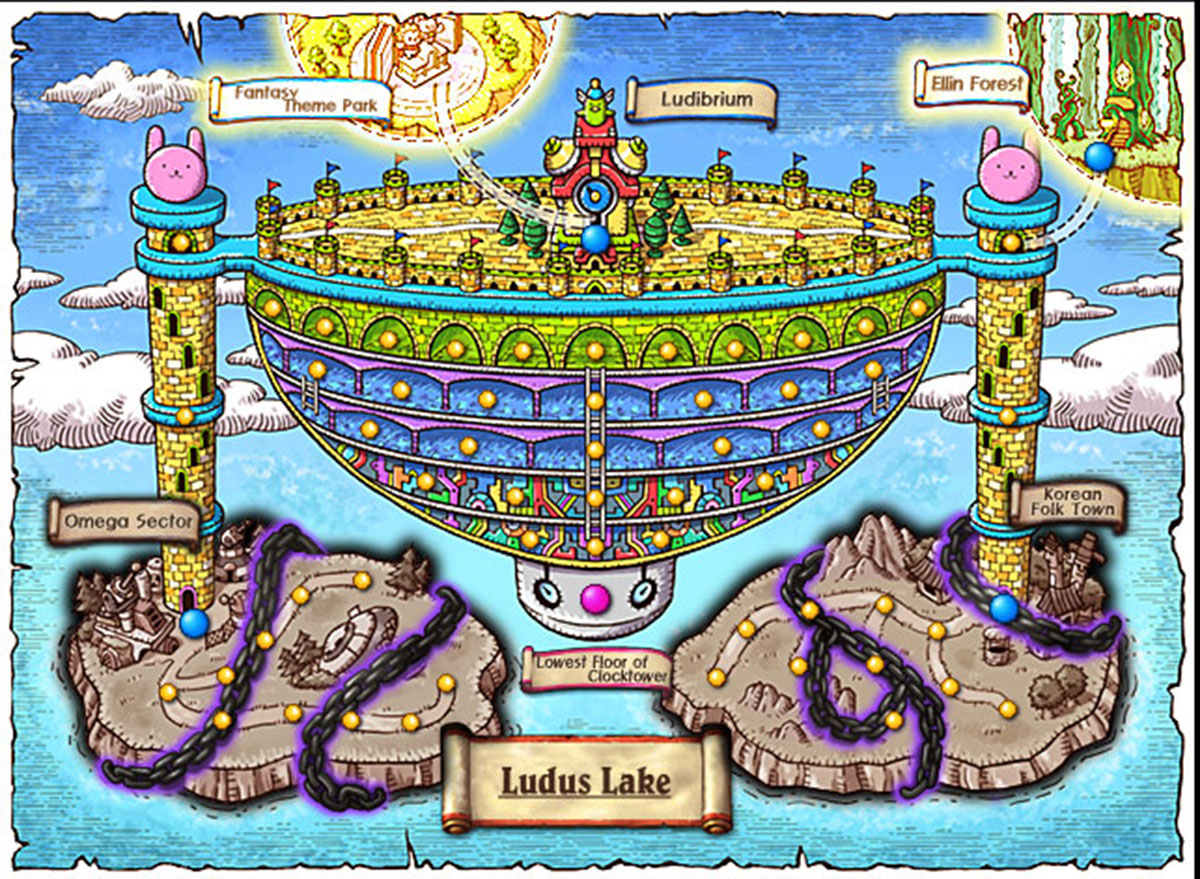 A massive lake sporting two islands, Ludus Lake's most famous city is Ludibrium, which is held aloft by the two towers on each island. Ludibrium is entirely made out of plastic construction blocks and sentient toy monsters prowl outside its borders. 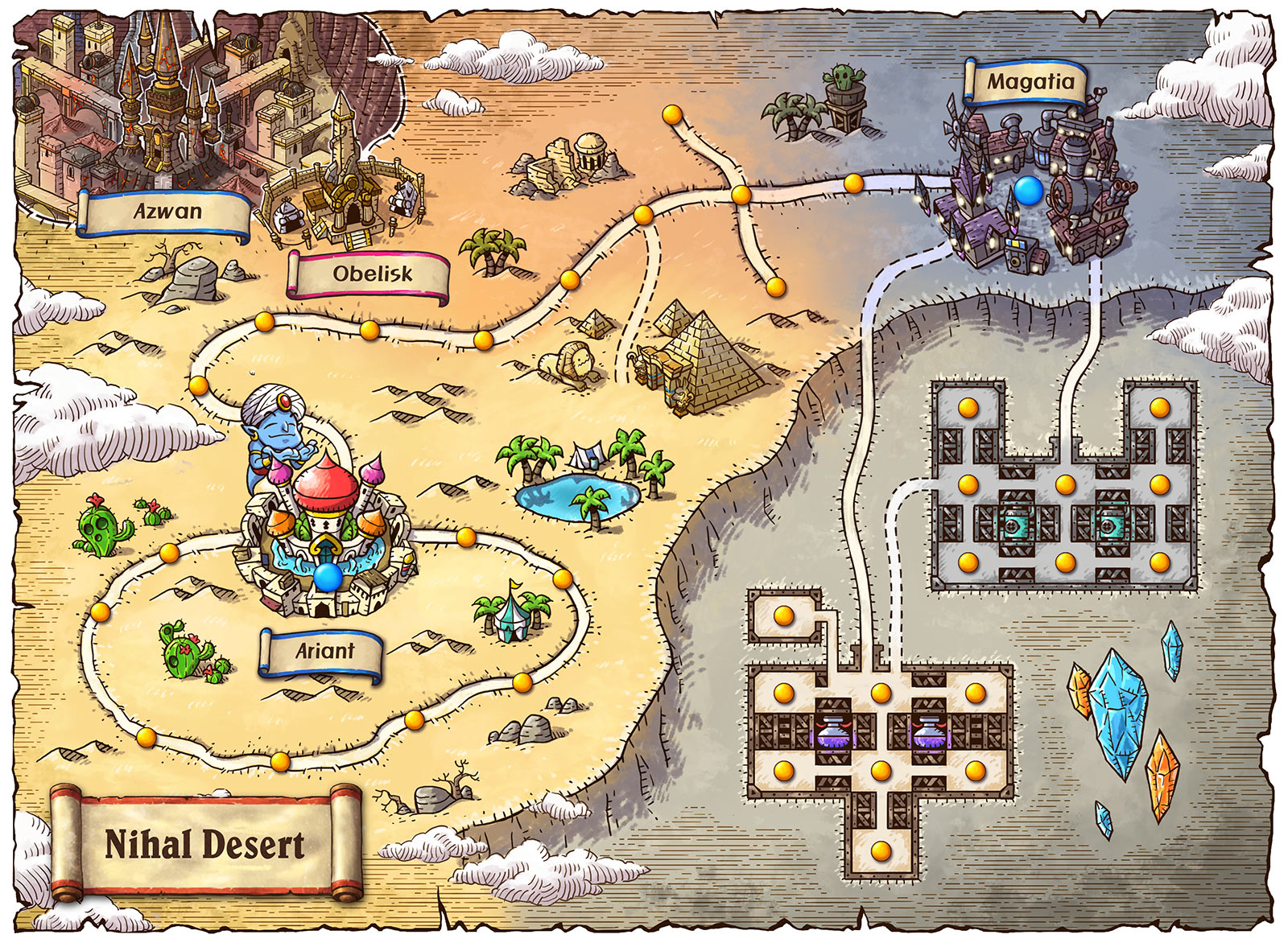 A sprawling, arid wasteland, the Nihal Desert is home to several notable locations including Azwan, an ancient underground city. Azwan was once a beautiful and thriving metropolis but succumbed to the Black Mage's evil. The entrance to this mysterious city is a massive obelisk. Nearby lays the town of Ariant, the capital city, and Magatia, famous for its history with alchemy. 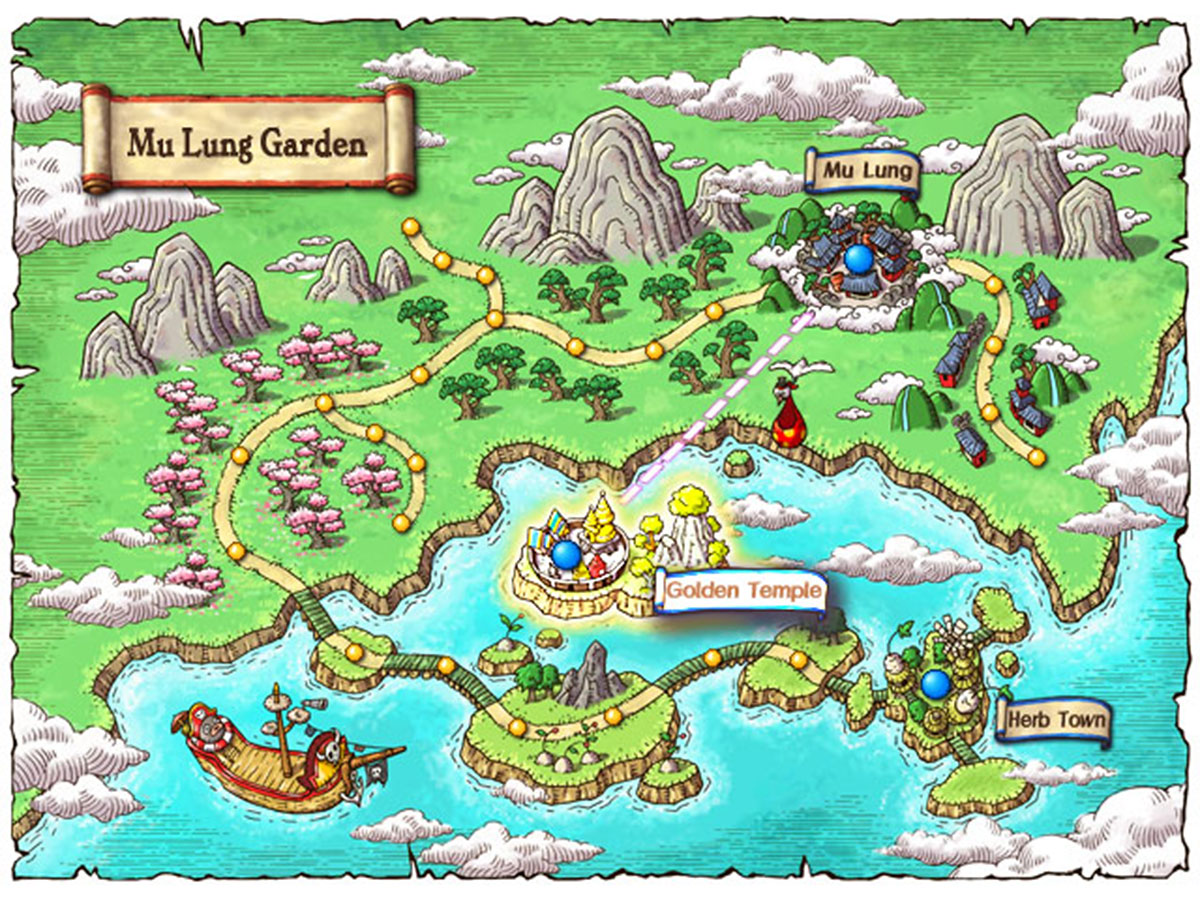 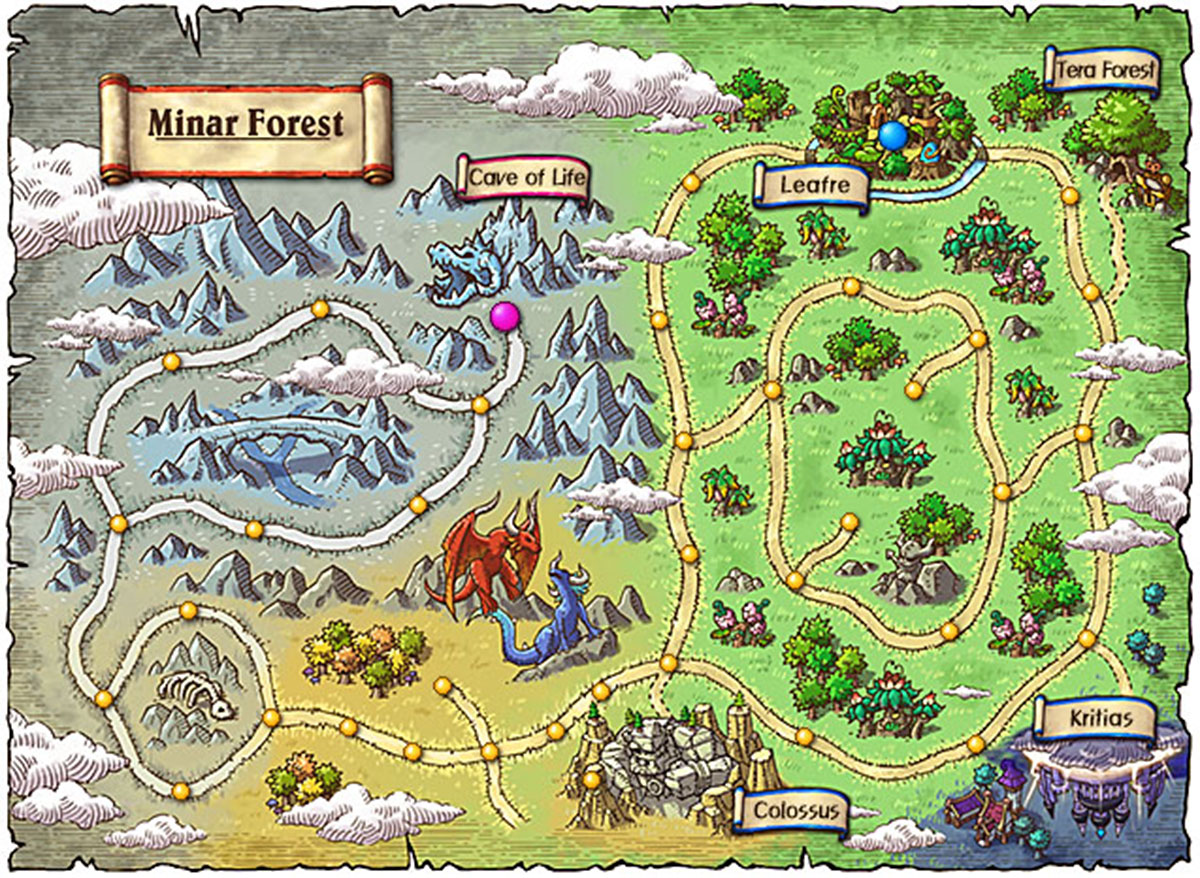 These verdant woods are guarded by one of Maple World's most dangerous dragons, Horntail. Its lone town is Leafre, home to the peaceful Halflinger race. 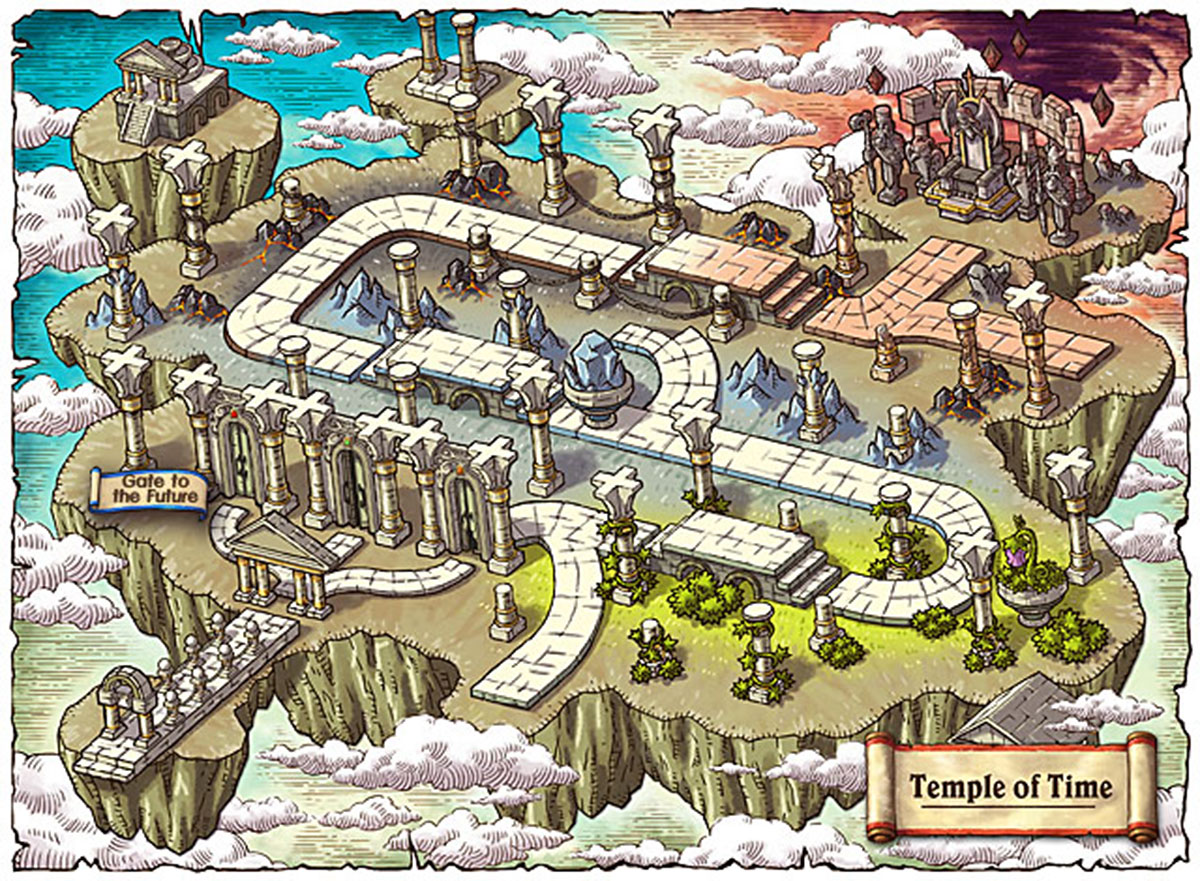 The Temple of Time is a mythical city with buildings inspired by ancient Greek and Roman architecture. Once home to Rhinne, the Transcendent of Time, it is now lorded over by a strange monster known as Pink Bean. 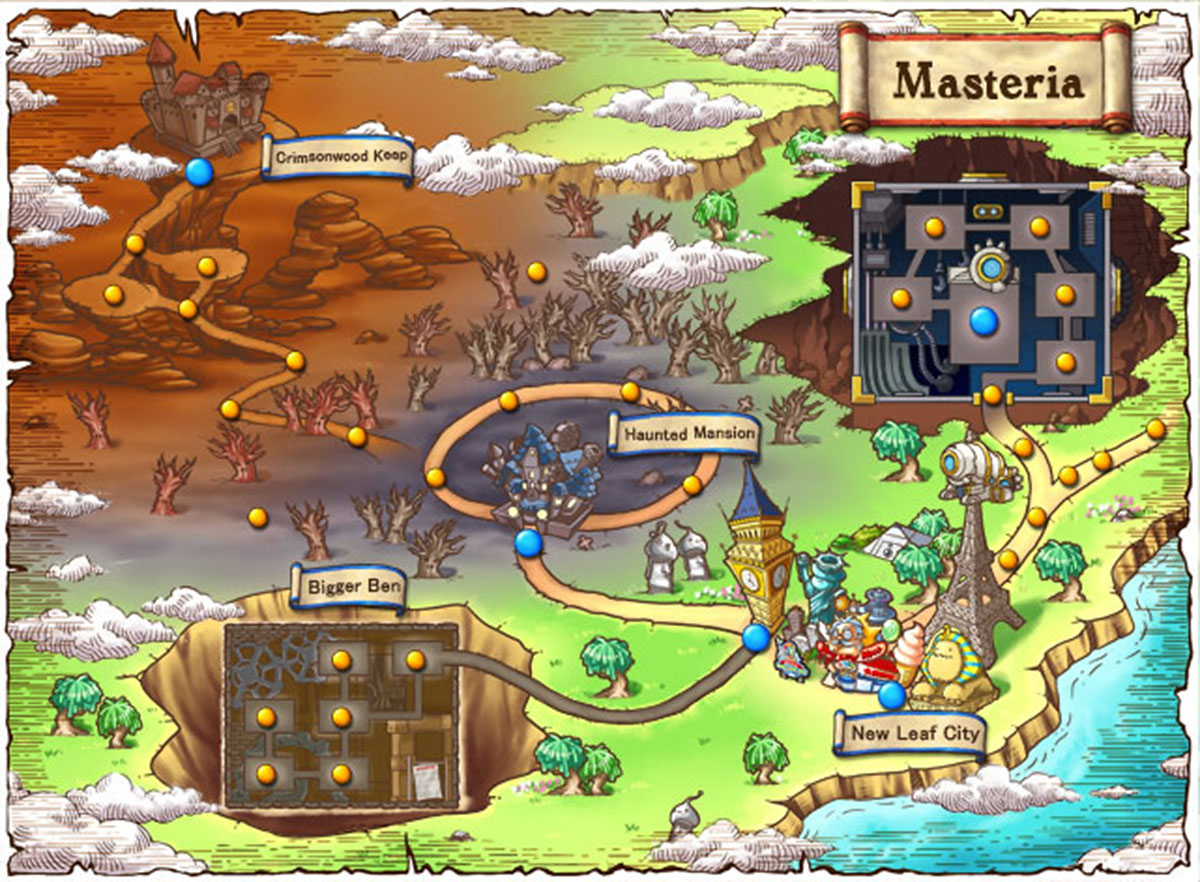 Masteria is a mysterious landmass that was once home to a benevolent and advanced civilization. It vanished off the face of the earth a millennium ago, but has since risen from the depths of the ocean. Its major town, New Leaf City, was built on the ruins of Olde Sapp Village. Other areas of note include the Phantom Forest, home to a terrifying Haunted House and prowled by the likes of Bigfoot and the Headless Horseman, and the sinister Crimsonwood Keep. 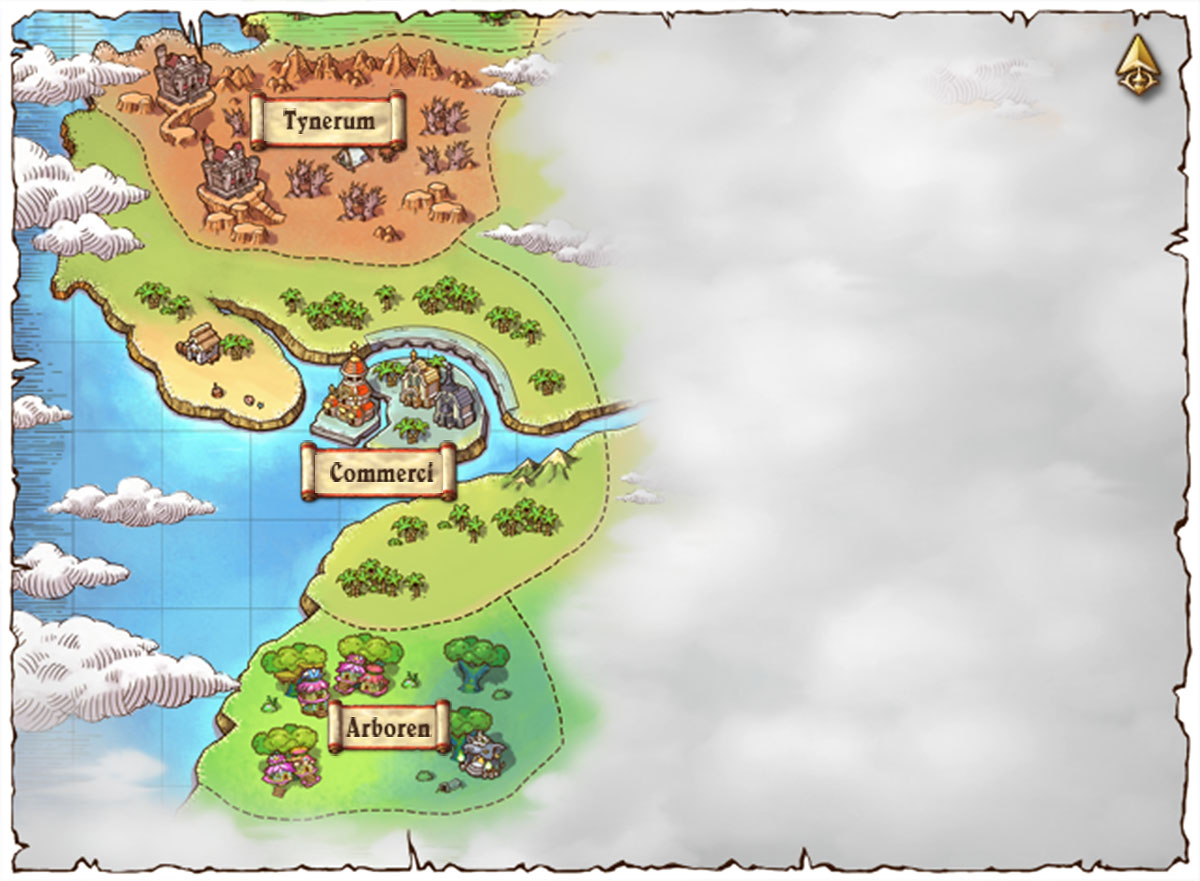 Dawnveil is a continent south of Ossyria. Until recently, it was hidden behind an arcane mist. It contains Tynerum, a land of demons and home to the powerful Gollux; Commerci, a bustling merchant hub filled with political intrigue; and Arboren, a quiet forest home to Chase, the Beast Tamer. 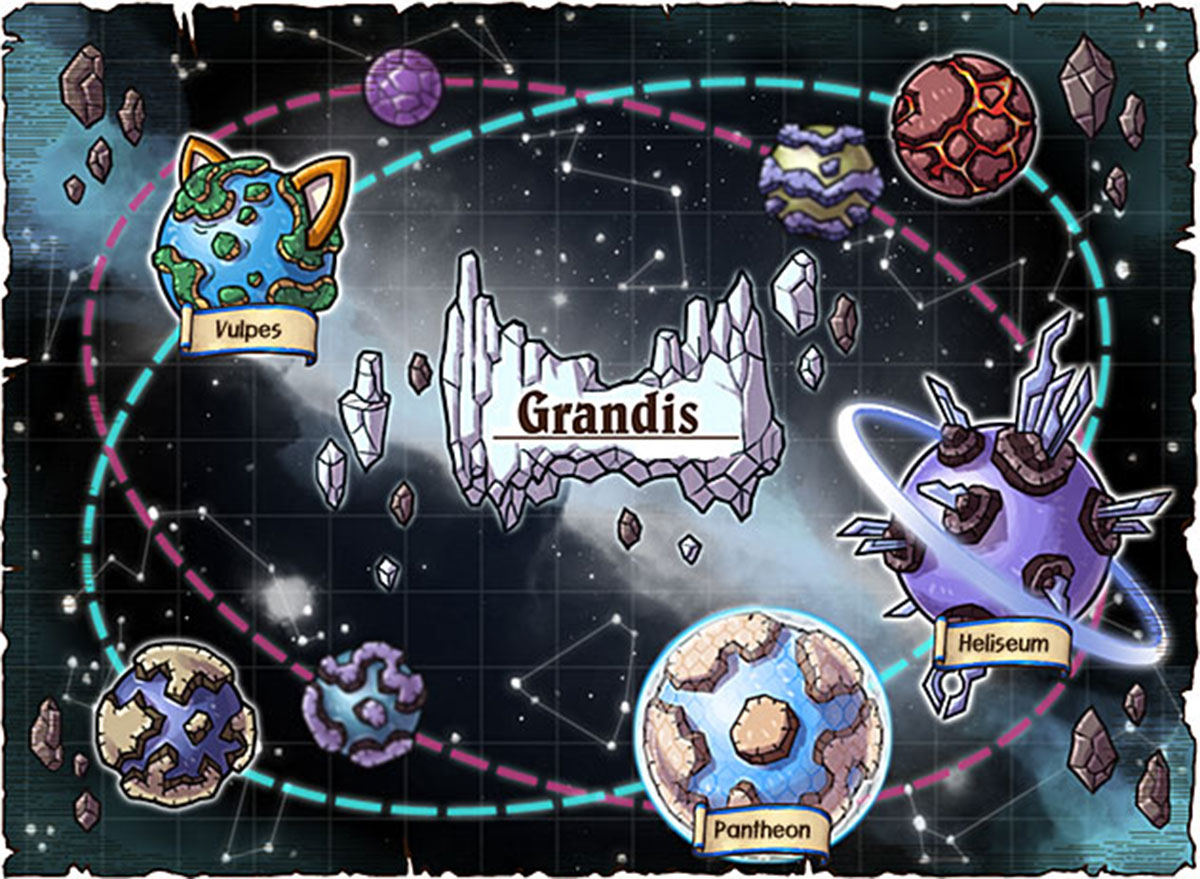 Grandis is a different world than Maple World, accessible via the Dimensional Gate in the Six Paths Crossway. It is home to the Nova, a noble race of half-human/half-dragon hybrids. 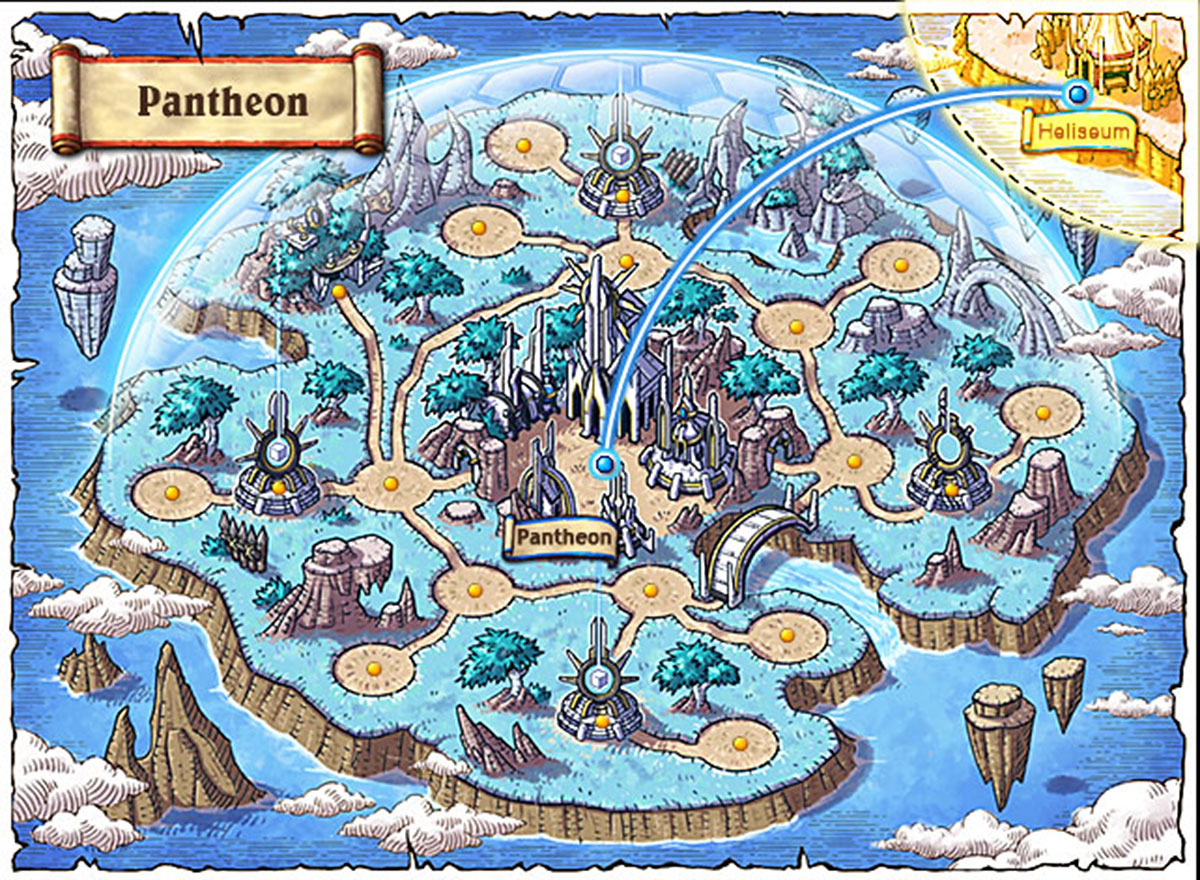 Pantheon acts as the forward operating base for the Nova and Maple Alliance's war against Magnus. It is become somewhat of a refugee camp, as countless civilians flee Heliseum every day. One day the Nova will reclaim their capital, but for now Pantheon is the only home they know. 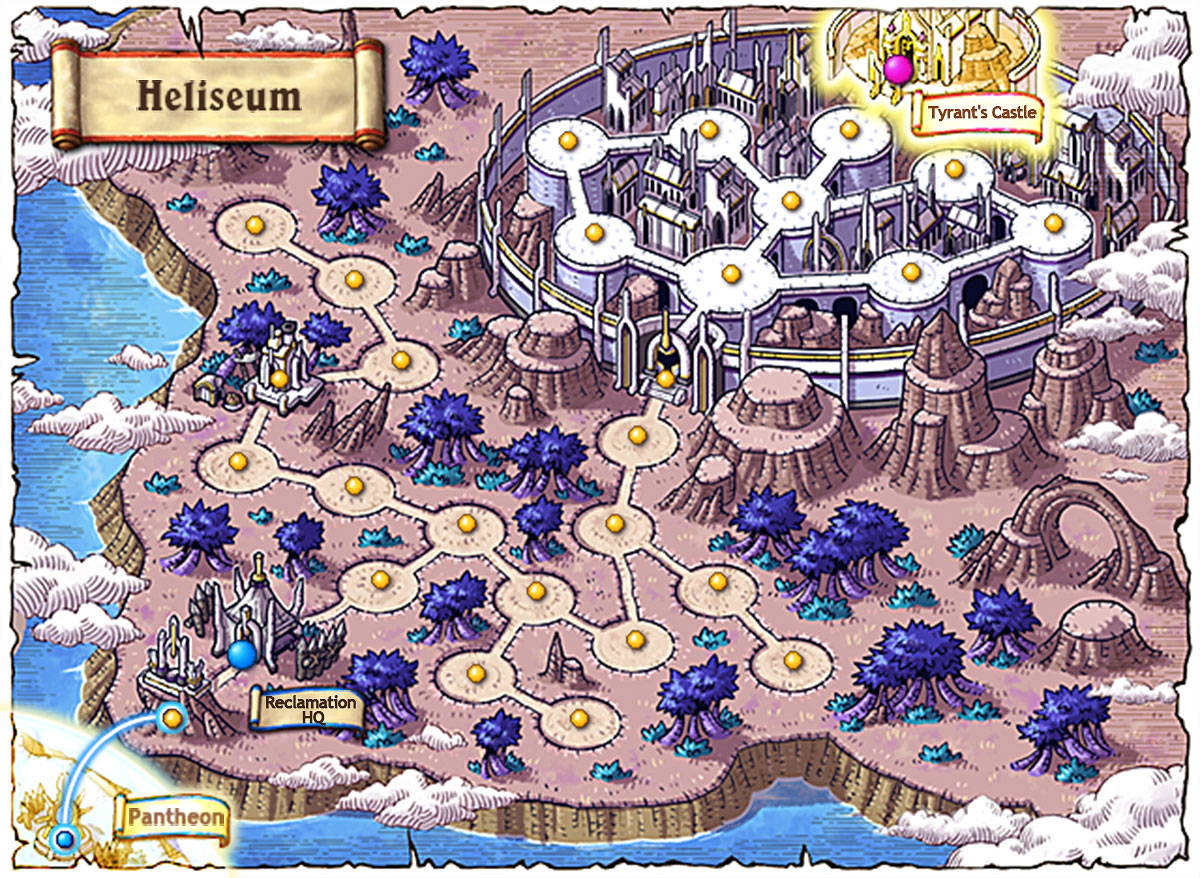 The former capital of the Nova, Heliseum is now controlled by Magnus, one of the Black Mage's commanders. Thankfully, the Nova Alliance has joined forces with the Maple Alliance in an effort to repel Magnus and return Heliseum to its former glory. 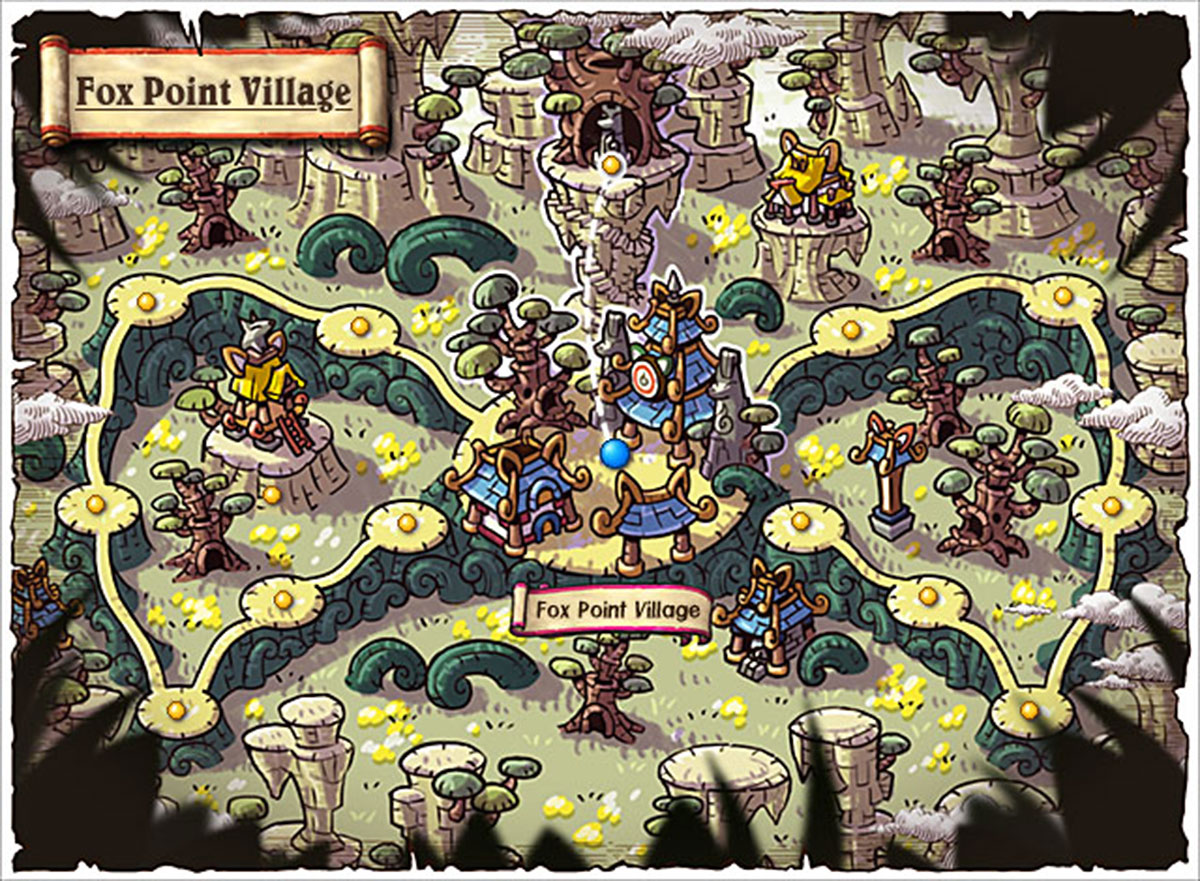 Vulpes is home to the Pointy-Eared Foxes, who live in harmony in Fox Point Village. It is also where Shade awoke following his battle with the Black Mage.